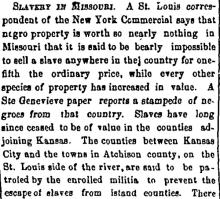 SLAVERY IN MISSOURI. A St. Louis correspondent of the New York Commercial says that negro property is worth so nearly nothing in Missouri that it is said to be nearly impossible to sell a slave anywhere in the country for one-fifth the ordinary price, while every other species of property has increased in value. A Ste. Genevieve paper reports a stampede of negroes from that country. Slaves have long since ceased to be of value in the counties adjoining Kansas. The counties between Kansa City and the towns in Atchison county, on the St. Louis side of the river, are said to be patrolled by the enrolled militia to prevent the escape of slaves from island counties. There were only fourteen hundred slaves in St. Louis two years ago, and the best judges now estimate that there are less than five hundred, and these principally old decripid house servants. One of Gen. Pillow’s former slaves from his Arkansas plantation is employed in a Union church, to work the organ bellows.