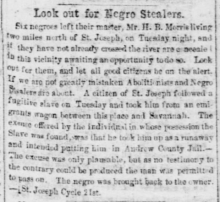 Look out for Negro Stealers.

Six negroes left their master, Mr. H.B. Morris living two miles north of St. Joseph, on Tuesday night, and if they have not already crossed the river are concealed in this vicinity awaiting an opportunity to do so. Look out for them, and let all good citizens be on the alert. If we are not greatly mistaken Abolitionists and Negro Stealers are about. A citizen of St. Joseph followed a fugitive slave on Tuesday and took him from an emigrants wagon between this place and Savannah. The excuse offered by the individual in whose possession the Slave was found, was that he took him up as a runaway and intended putting him in Andrew County Jail.––The excuse was only plausible, but as no testimony to the contrary could be produced, the man was permitted to pass on. The negro was brought back to the owner.––[St. Joseph Cycle 21st.