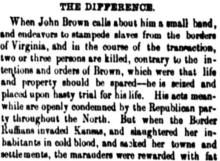 When John Brown calls about him a small band, and endeavors to stampede slaves from the borders of Virginia, and in the course of the transaction, two or three persons are killed, contrary to the intentions and orders of Brown, which were that life and property should be spared––he is seized and placed upon hasty trial for his life. His acts meanwhile are openly condemned by the Republican party throughout the North. But when the Border Ruffians invaded Kansas, and slaughtered her inhabitants in cold blood, and sacked her towns and settlements, the marauders were rewarded with fat appointments, and became pets of the Federal Government. What we have stated are historical facts. A number of instances are enumerated by the Albany Evening Journal, which attests what we have said:

S.W. Clark murdered a black man named Barber, by shooting him in the back. For this practical illustration of modern Democracy, he was made a Purser in the Navy.

James Gardiner, who co-operated with Clark in the murder of Barber, was appointed Post-Master at Lawrence!

James headed the mob which sacked Lawrence. He was paid off with a lucrative office in New Mexico!

Frederick Emery, one of the murderers of Phillips, at Leavenworth, was compensated by the appointment of Receiver of the Land Office at Ogden!

J.S. Murphy, who helped the assassinate of Phillips, and who was notoriously one of the gang by whom Hopps was scalped, was made Agent for the Potawotamie Indians.

Rush Elmore, who made a persevering effort to assassinate J.H. Kagi, was elevated to the office of U.S. District Judge!

Russell and Waddell furnished teams and provisions to the Border Ruffians, who invaded Kansas and seized the ballot-boxes in 1856. For this they have been given immense contracts by the government!