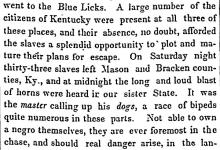 [For the True Democrat.]

MESSRS. EDITORS: On the 23d ult., the Whigs held their Convention at Ripley. On the 24th, Gen. Scott arrived at Maysville, and on the 25th, went to the Blue Licks. A large number of the citizens of Kentucky were present at all three of these places, and their absence, no doubt, afforded the slaves a splendid opportunity to plot and mature their plans for escape. On Saturday night thirty-three slaves left Mason and Bracken counties, Ky., and at midnight the long and loud blast of horns were heard in our sister State. It was the master calling up his dogs, a race of bipeds quite numerous in these parts. Not able to own a negro themselves, they are ever foremost in the chase, and should real danger arise, in the language of Falstaff, prudence is considered the better part of valor." Multitudes of these creatures were continually prowling about Ripley and vicinity Saturday night, Sunday and Sunday night, but without any success, save the violent assault made on the doggeries of our town. About 2 o'clock Monday morning, eight bundles were found at the lower end of Ripley, in the vicinity of M'Cagues' steam grist mill. Word was immediately conveyed back; great excitement ensued. "The niggers are in Ripley; we have them pinned, and they can not escape." Hordes of dogs, in the shape of human beings, crossed the river, armed to the teeth with double-barrelled shot guns, rifles, pistols, clubs and bowie-knives. So confident were they of getting their negroes, as I am credibly informed, that they actually sent to Minerva for witnesses to prove them, and one individual went even so far as to bring a carpet sack full of handcuffs from Maysville. If it was their intention by all this, to frighten the citizens of Ripley, they assuredly and most signally failed. As the hunters passed, the women shouted hurra for Hale and laughed. The boys, at least some of them, were furnishing themselves with tin guns and as one of the hunters subsequently acknowledged, "he was d––d badly bored."

During the day, the pursuers were permitted to search several houses, not that they had any right, for the officers of our town refused to allow them a search warrant, but from the circumstances it was thought advisable. Each failure to make any discovery, was followed with the shout, hurra for Hale. In the country, their conduct was anything else than decent; cocking pistols and presenting them at the breast of individuals, in order to exact information, by the bye, was rather a practical disregard of the Baltimore platforms. In the evening, the gentry embarked, and when cleverly on board the steam ferry, Whigs., Democrats, and Freesoilers, shouted "Hurrah for Hale!"

After this, things remained pretty much quiet till Friday night, when, as I verily believe, a base and dastardly attempt was made to kidnap a colored man of our town; for some cause or other they seem to cherish a deadly hatred towards him. During the early part of Friday night, three Kentuckians and a negro were observed coming up the river in a skiff. Their movements were closely watched, and about midnight, this negro in company with two others, were seen standing on the steps of John Parker's house. "Darkies?" says a respectable citizen of our place, "Yes," answers one of them, "I am a runaway, my wife and children are across the river and I want help. "You can have it, go to my house." But no sooner had the negro entered the house, than his life was threatened with a bayonet at his breast, unless he revealed the whole plot. Instantly falling on his knees and begging for mercy; made the following statement: My name is William Carter; I am the slave property of the deceased widow Jinnings, and was stolen on the night of the 1st of Oct., by Geo. Jinnings, from John Jinnings, of Brecken Co., Kentucky; was brought over the river by three white men, Geo. Jinnings, Chas. Gibbons, and Burn Cobarn, as a spy to look for slaves and to find out the residence of the colored man. John Parker, (remember that John Parker's house had been searched by some 20 Kentuckians the Monday previous, and must have been well known to some of the above named persons, as I believe.

To the question where are the three white men? he replied that they were under the bank, and would wait there till he came; he further said that they had promised him enough to pay his freedom.–– Three of our citizens went down to see the gentry under the bank, and when in a few rods of the place designated, Jennings & Co. drew their pistols, and bid them come no nearer, but one man, nevertheless, continued to advance, reaching out his hand and saying that he was unarmed, and that he did not wish to harm them, but to tell them that their negro was at his house and to go and to get him. They replied that he was a free negro, and refused to go, lest there might be a crowd collected on the bank. After this Jennings & Co. recrossed the river and brought over the remainder of their company. Baffled and uneasy, they finally made a demand on the negro, they finally made a demand on the negro, which was promptly rejected, for by their own statement he was a freeman. Mr. Jennings then came forward, and claimed the man as his slave. His claim was also rejected, on the ground that the master had brought him over the river, and that he was, therefore, a freeman.–– All this time the negro pertinaciously insisted on going back, and having no right to detain him by force, Mr. Geo. Jennings was permitted to take him back on proof that John Jennings was his master.

One of the company I understand has since expressed himself after this fashion.––"Beat d––d bad beaten at our own game; out of the thirty-three escaped only three have been captured."