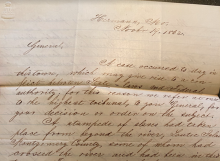 A case occurred to-day in this town, which may give rise to a conflict between State laws and Federal authority; fo this reason we refer at once to the highest tribunals to your Generals for your decision or order on the subject

A stampede of slaves had taken place from beyond the river, Loutre Island, Montgomery County, some of whom had crossed the river and had been in this town. To-day several of the respective owners, for the most part avowed secessionists and enrolled sympathizers came cross and demanded of John B. Miché, Justice of the Peace, a warrant, according to the Statutes of the State. We advised him to refuse it on the ground that the matter belonged before the Federal authorities under the order declaring martial law over Missouri and under subsequent orders from the President and Department Commanders...

The disappointed owners now threaten to prosecute the above name Justice. The act of Congress, confiscating rebel property and liberating their slaves, now in full force, places it clearly beyond the power of a justice of the peace, to decide, who is a loyal owner and who not, and in consequences they cannot be required to issue warrants to any of them.

It is to be expected, that many similar cases will arise within he next days, and in order to protect the unconditional supporters of the Government against mischief from the hands of its avowed enemies, we would respectfully request an authoritative order or re-publication of orders already existing touching the subject.

If a few loyal owners shall suffer under the circumstances, it cannot be avoided as little as the injury done by a battle to thousands of loyal families; besides, if the loyal owners would emancipate their slaves voluntarily under the condition that these liberated hands would remain with them in the condition of hired laborers, they would neither lose their services, nor the compensation which our legislature certainly will afford them....

[in pencil] The writer should be informed that the Justice has done right in withholding his warrant under the facts (as stated) & instructed to arrest & bring before the Provost Marshal the slaveholders if more trouble is caused.