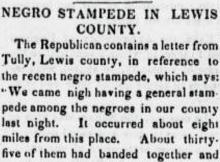 The Republican contains a letter from Tully, Lewis county, in reference to the recent negro stampede, which says: "We came nigh having a general stampede among the negroes in our county last night. It occurred about eight miles from this place. About thirty-five of them had banded together and provided themselves with arms, determined to fight their way out of the country. They were principally the property of Mr. James Miller and Wm. Ellis. Mr. Miller was aroused about 3 o'clock in the morning, by some of his negroes entering his room and taking his guns. He ordered them to lay them down, but they refused, and cleared out as fast as possible. The alarm was immediately given in the neighborhood, and it was soon discovered that they were all at the house of Mr. M'Cutchen, where some additions were making to their numbers, and from which point it was supposed, they intended to move. After day some time, (they in the meanwhile, being guarded until a sufficient force could be collected,) they were required to surrender and return to their duty; but they refused. Led on by an old man, who was armed with knives and a club, they approached the whites threatening to kill them. On the near approach on the leader, he was shot, and died in a few minutes. The others surrendered. There were among them men, women and children--they had wagons and teams, and seemed determined to go away publicly." These are some of the fruits of Abolitionism.