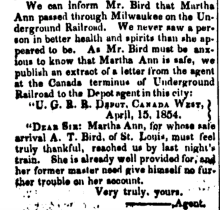 Respect for the Compromises of 1850

The following article is found in the Chicago Tribune––a paper which has been constantly prating about the sanctity of the Compromises of 1850 and 1820, but which has never missed an opportunity of glorifying over the violation of either as in the present case. The editor of the Free Democrat is now under bonds to answer at the next term of the United States Court, for his participation in a mob, by which the "Fugitive Slave Law" was violated, and a negro, the slave of Mr. Garland of this county, rescued from the jail and the custody of officers of the State.––[Republican.

We find the following article in the Milwaukee Free Democrat of a late date. It is refreshing.

The Missouri Republican of March, contains the following advertisement:

"Ran away from the subscriber on Sunday; 19th inst., a mulatto woman named Martha Ann, about thirty-five years of age five feet high, light complexion, delicate appearance, diffident manner when addressed. She took with her a large quantity of good olcthing [clothing]. The above reward will be given if she should be apprehended out of this State, and fifty dollars if taken in the State and returned to me in St. Louis."

"DEAR SIR: Martha Ann, for whose safe arrival A.T. Bird, of St. Louis, must feel truly thankful, reached us by last night's train. She is already well provided for, and her former master need give himself no further trouble on her account.