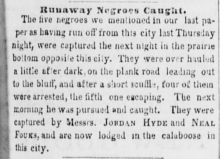 The five negroes we mentioned in our last paper, as having run off from this city last Thursday night, were captured the next night in the prairie bottom opposite this city. They were over hauled a little after dark, on the plank road leading out to the bluff, and after a short scuffle, four of them were arrested, the fifth escaping. The next morning he was pursued and caught. They were captured by Messrs. JORDAN HYDE and NEAL FOUKS, and are now lodged in the calaboose in this city.