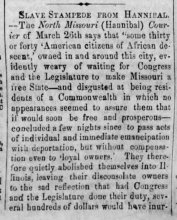 SLAVE STAMPEDE FROM HANNIBAL.––The North Missouri (Hannibal) Courier, of the 26th, says that “some thirty or forty American citizens of African descent, owned in and around the city, evidently weary of waiting for Congress and the Legislature to make Missouri a free State— and disgusted at being residents of a commonwealth in which no appearances seemed to assure them that it would soon be free and prosperous, concluded, a few nights since, to pass acts of individual and immediate emancipation, with deportation, but without compensation even to loyal owners. They therefore quietly abolished themselves into Illinois, leaving their disconsolate proprietors to the sad reflection that had Congress and the Legislature done their duty, several thousands of dollars would have inured to their use and benefit where ‘nary red’ now represents the value of their departed fellow-citizens."