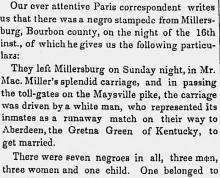 Our ever attentive Paris correspondent writes us that there was a negro stampede from Millersburg, Bourbon county, on the night of the 16th inst., of which he gives us the following particulars:

They left MIllersburg on Sunday night, in Mr. Mac. Miller's splendid carriage, and in passing the toll-gates on the Maysville pike, the carriage was driven by a white man, who represented its inmates as a runaway match on their way to Aberdeen, the Gretna Green of Kentucky, to get married.

There were seven negroes in all, three men, three women and one child. One belonged to Mrs. Taylor, one to Mr. Mac. Miller, and the others to Col. Knapp, and others in the neighborhood of Millersburg. One of the negro men had been only set free at the last term of Court, by Mr. Abe. Moore, or Bourbon.

They proceeded in the carriage to near Washington, whence they went on foot to East Maysville, where they attempted to cross the Ohio in a skiff. The skiff leaked and sunk, and the three women and child were drowned. The men cried for help and were rescued by a market-man going from Aberdeen to Maysville, who, happening not to be an Abolitionist, took them to the jail at Maysville.

There is great excitement at Millersburg, and if they can get possession of the free negro, he will probably be hung. The white man, if he is discovered, will be pretty apt to meet with the same treatment.