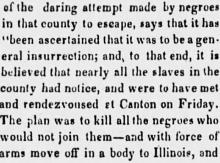 THE LEWIS COUNTY AFFAIR.––The last N.E. Rep'r, after giving an account of the daring attempt made by negroes in that county to escape, says that it has "been ascertained that it was to be a general insurrection; and, to that end, it is believed that nearly all the slaves in the county had notice, and were to have met and rendezvoused at Canton on Friday. The plan was to kill all the negroes who would not join them––and with force of arms move off in a body to Illinois, and thence to Canada. However preposterous the plan may seem, it certainly has a great deal of truth for its foundation. The younger negroes not only disclosed it, but others, who did not join them, acknowledged they were notified and knew of it. Besides, others have made a break. We understand that Parson James Lillard's negroes, in his absence, after abusing the family and making many wicked threats against them, made off, but were luckily caught by a neighbor, and lodged in the Monticello jail." The leaders in the stampede have been shipped to St. Louis and sold.