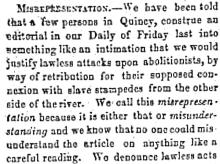 MISREPRESENTATION.––We have been told that a few persons in Quincy, construe an editorial in our Daily of Friday last into something like an intimation that we would justify lawless attacks upon abolitionists, by way of retribution for their supposed connexion with slave stampedes from the other side of the river. We call this misrepresentation because it is either that or misunderstanding and we know that no one could misunderstand the article on anything like a careful reading. We denounce lawless acts no matter by whom committed. We stated positively that we did not believe that any citizen of Quincy had anything to do with the recent runaway case––and yet we are told that we would "justify lawless retribution upon citizens of Quincy" for––offenses not committed. It strikes us that those who are so ready to find fault might be a little more consistent.

We have nothing to take back or explain. What we have said––we have said,––and if anyone can torture it, into the slight approbation of or apology for anything like violation of law by any and everybody, they have "sharp eyes for flaws"––We would be glad to assume that the unjust construction spoken of, was the result of mistake, but in order to do this, we should have to assume that the conclusion was jumped at from a hasty and careless reading––and we need hardly say that this would be the next thing to deliberate injustice in such a case.