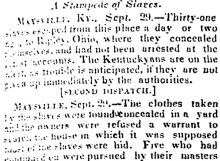 A Stampede of Slaves.

MAYSVILLE, KY., Sept. 29––Thirty-one slaves escaped from this place a day or two ago, to Ripley, Ohio, where they concealed themselves, and had not been arrested at the latest accounts. The Kentuckyans are on the [illegible] as trouble is anticipated, if they are not given up immediately by the authorities.

MAYSVILLE, Sept. 29––The clothes taken by the slaves were found concealed in a yard and the owners were refused a warrant to search the house in which it was supposed most of the slaves were hid. Five who had continued on were pursued by their masters and were captured. They are expected to be brought over tonight.

The negroes of Ripley gathered in numbers, armed with guns, and surrounded the hotel where the Kentuckyans stopped. Fears are entertained of a serious disturbance, as the Kentuckyans remain there on the watch, and are determined to recover the slaves.

Much indignation is felt here because the authorities of Ripley refused to assist the masters in granting warrants.