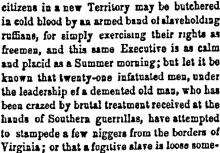 When the plot of Old Brown developed itself at Harper's Ferry, the General Government was the first to take measures to put down the petty emeute dignified with the name of "insurrection." President Buchanan's attention at once became enlisted in the matter, and he even, we believe, went so far as to give his personal oversight in arranging and dispatching the expedition of marines. To him then the Union appeared to be imperiled, although he must have known that at most the insurrectionists could only number a very few negroes, with possibly a sprinkling of whites. But then the "institution" was involved, and that alone is sufficient to arouse to terrible action a Democratic President. Peaceable, law-abiding citizens in a new Territory may be butchered in cold blood by an armed band of slaveholding ruffians, for simply exercising their rights as freemen, and this same Executive is as calm and placid as a Summer morning; but let it be known that twenty-one infatuated men, under the leadership of a demented old man, who has been crazed by brutal treatment received at the hands of Southern guerrillas, have attempted to stampede a few niggers from the borders of Virginia; or that a fugitive slave is loose somewhere North of Mason's and Dixon's Line, and forthwith what patriotic zeal fires the Presidential bosom. The army and navy of the United States are not too much then to be brought into requisition to vindicate "Southern rights."

While the United States marines were crushing the pitiable insurrection of Old Brown and his band, quite a different programme was being carried out in the South. The yacht Wanderer has again set sail for the coast of Africa, her commander openly avowing that his purpose is to secure another cargo of slaves; and yet no effort is made to intercept her. Meanwhile, too, the old farce of putting filibusters upon trial and acquitting them has been gone through with at New Orleans. The evidence clearly showed that an unlawful expedition started out on the tow-boat Panther, destined for some of the Central American States, with which we are at peace, and which it was the intention to invade. Yet a United States Commissioner pronounced acquittal, and now the pirate Walker and his outlaw confederates are loose in New Orleans, doubtless plotting another raid.

There can be no longer a doubt entertained that the Federal Administration is in league with the Southern filibusters. President Buchanan's instructions to flag officer McClunry, of the Home Squadron, are that he must avoid the "grave error" committed by Com. Paulding! He must not seize Walker on land or in the harbor of any foreign power, but he "must use all diligence," [illegible,] in seizing him! Where, then, is he to seize the pirate? Com. McClunry evidently contemplated this question when he asked "if he would be allowed to seize a vessel at sea bearing the American flag, with a large company on board, apparently filibusters, and among whom he might recognize noted filibuster chiefs, William Walker or Frank Anderson, for example?" The President answered emphatically, NO! More than this, the commander of the House Squadron was instructed to see that no British war ship seize such a vessel! Now what does all this mean? If an officer is detailed to catch a thief, it is expected that he will arrest him wherever he can lay hands upon him. But if he is instructed not to arrest the thief on his way to commit the theft, nor while in the act, and to prevent any one else from arresting him, what is such order more than a virtual command to the officer to become an official accessory to the crime; and how much less guilty of the crime is the magistrate who should issue such decree than the culprit himself? We assert, then, that the country is fully justified in charging upon President Buchanan complicity with Walker's piracies.

How can such an Administration, its menials, its camp-followers, and its suttlers, and the party which has called it into being and now upholds it, --consistently clamor for the blood of a few misguided men who, demented by an over weening solicitude for the welfare of their down-trodden fellow men, have been led into error? We know Brown and his unfortunate followers have violated law, and merit punishment --what punishment it is not for us to say. And we, in common with the great mass of the anti-slavery people of the North, would be the last to shield these criminals from the just penalties due their acts; but we will here for once and all protest, with our fellow Republicans, against the cowardly and malicious discrimination made against the North by the powers that be. When the pirates who land cargoes of stolen negroes from the shores of Africa upon our Southern shores, are ignominously strung up; with such pirates as Walker and his cut-throat band are put to rest; and when marauders who overrun our Territories, butchering the peaceable Free State people and pillaging their homes, enact the death-scene on the gallows, then, and not till then, will the people of the North cease to upbraid the Administration for its criminal partiality; then will Gen. Browns, and Capt. Cooks, and Gerrit Smiths cease to exist in the North; and then will the occupation of sneaking Democratic Congressmen and United States Marshals; --these unclean birds who would befoul their own nests; --those creatures who, in a miserable effort to manufacture a [illegible] bit of political capital to save, if possible, a bankrupt party, will turn common informer against their own State and seek to disgrace her by the basest means, be gone; for fairness and honesty will then be the best capital, --something these creatures can never hope to possess.