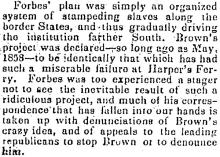 The Abolition Insurrection in Virginia

...Forbes' plan was simply an organized system of stampeding slaves along the border States, and thus gradually driving the institution farther South. Brown's project was declared --so long ago as May, 1858 --to be identically that which has had such a miserable failure at Harper's Ferry. Forbes was too experienced a stager not to see the inevitable result of such a ridiculous project, and much of his correspondence that has fallen into our hands is taken up with denunciations of Brown's crazy idea, and of appeals to the leading republicans to stop Brown or to denounce him....

[Editor's Note: The majority of this article has been omitted from our transcription except for the portions directly mentioning the term "slave stampedes" or some variant.]