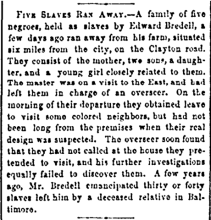 FIVE SLAVES RAN AWAY.––A family of five negroes, held as slaves by Edward Bredell, a few days ago ran away from his farm, situated six miles from the city, on the Clayton road. They consist of the mother, two sons, a daughter, and a young girl closely related to them. The master was on a visit to the East, and had left them in charge of an overseer. On the morning of their departure they obtained leave to visit some colored neighbors, but had not been long from the premises when their real design was suspected. The overseer soon found that they had not called at the house they pretended to visit, and his further investigations equally failed to discover them. A few years ago, Mr. Bredell emancipated thirty or forty slaves left him by a deceased relative in Baltimore.