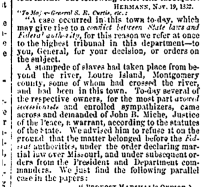 Full Details of the Transaction––

Editors Missouri Democrat:––Opposite the town of Hermann, in Gasconade County, is Loutre Island, an exceedingly fertile bottomland, occupied by slave owners. The property of these had conceived the idea of emancipation, and had stampeded accordingly. The recent election triumphs of the Democracy inspired the slave barons with new courage, and they followed their chattels even into German Gasconade with foul intent. The following letter tells the sequel:

"A case occurred in this town to-day which may give rise to a conflict between State laws and Federal authority. For this reason, we refer at once to the highest tribunal in this department, to you, General, for your decision, or orders on the subject.

“A stampede of slaves had taken place from beyond the river, Loutre Island, Montgomery County, some of whom had crossed the river, and had been in this town. To-day several of the respective owners, for the most Fart [part] avowed secessionists and enrolled sympathizers, came across and demanded of John B. Michie, Justice of the Peace, a warrant, according to the statutes of the State. We advised him to refuse it on the ground that the matter belonged before the Federal authorities, under the order declaring martial law over Missouri, and under subsequent orders from the President and Department commanders. We just find the following parallel case in the papers:

"The Judge of the Criminal Court having charged the Grand Jury on certain points where a conflict of authority might arise, all persons will take notice that any attempt to execute State laws at variance with the orders of the President and military commanders will be construed as a contempt of the authority of the United States, and will be summarily punished. The status of the negro is involved in the war now existing, and will in its progress be clearly determined.––In the meantime runaway slaves must be treated as free, and people encouraged to give them employment as such. So far as the Court confines itself to punishing murder, arson, burglary, and crimes mala in se, the Provost-Guard is required to co-operate.

"The disappointed owners now threaten to prosecute the above named Justice. The act of Congress confiscating rebel property and liberating their slaves, now in full force, places is clearly beyond the power of a Justice of the Peace to decide who is a loyal owner and who not; and in consequence, they cannot be required to issue warrants to any of them.

"It is to be expected that many similar cases will occur within the next few days, and in order to protect the unconditional supporters of the government against mischief from the hands of its avowed enemies, we would respectfully request an authoritative order or republication of orders already existing touching the subject.

"If a few loyal owners shall suffer under the circumstances, it cannot be avoided, as little as the injury done by a battle to thousands of loyal families; besides, if the loyal owners would emancipate their slaves voluntarily, under the condition that thus liberated hands would remain with them in the position of hired laborers, they would neither lose their services nor the compensation which our Legislature certainly will afford them, etc., etc."

Finding thus nobody in Hermann willing to act as slave-catcher, the aggrieved owners looked about the country, and, at last, got hold of an obscure county Squire, who issued the warrants asked for, and placed them in the hands of a Deputy Sheriff. On Tuesday, the 25th inst., at noon, four negroes were brought in by him and put into the Count jail for safe keeping. It so happened that the identical contrabands had sought protection in the camp of some United States volunteer company, stationed along the Pacific Railroad, but the Captain, having no employment for them, advised them to hire out to some farmers in the vicinity, assuring them of their safety.

No sooner was it known that the fugitives were in jail, and were to be taken across the river than the citizens became terribly exasperated; they quickly assembled with arms, and were determined that the negroes should never be returned to their disloyal owners––Already it become manifest that the strong arms of our brave-hearted mechanics would open the jail by force. Just then the afternoon mail brought the answer of Maj. Gen. Curtis to the letter already quoted, in which the General says:

"The Justice did right in withholding his warrant under the facts as stated. He should arrest and bring before Provost-Marshal these slaveholders, if they occasion any more trouble. By the laws of Congress, officers of the army and navy are forbidden to return fugitive slaves under any circumstances."

To the Provost-Marshal, then, a committee was sent, to ascertain what he should do.––The individual who had hitherto acted as Provost, and also occasionally sported a Lieutenant Colonel's uniform, in St. Louis, was, however, not to be persuaded to put his hands into this pie, and declared he could do nothing since he was not clothed with any authority. Being pressed to furnish tangible proofs for his singular action, he at last, very reluctantly though, produced a letter from headquarters, ordering his removal from both positions, which he slyly had kept a profound secret to himself. That was another triumph of the radical Emancipationists, and many a hurrah was shouted when the dismissal of the odious individual became known.

Upon this the citizens agreed to abstain from any violence until nine o'clock at night, but guards were posted, and the excitement ran high. Nine o'clock struck, but no message had been received from headquarters.––The citizen got their tools ready to open the jail, and it was useless trying to stem the raging current. Then, just in the nick of time, appears the messenger with a telegram: Gen. Curtis appoints Capt. Manwaring Provost Marshal; and with three thundering cheers for Gen. Curtis, the citizens march to the residence of the new officer. An order for the immediate release of the contrabands is issued; they are set free, at once, hired out to farmers, and quiet rings supreme over our plucky town.

No disgrace could be more rankling in the breasts of our staunch citizens than to have Gasconade County converted into a slave-hunting ground for the enemies of our government.

County Squires will please notice this "precedent," and not meddle with the authority of Uncle Sam.