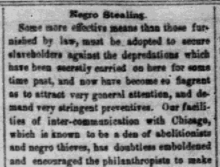 Some more effective means than those furnished by law, must be adopted to secure slaveholders against the depredations which have been secretly carried on here from some time past, and now have become so flagrant as to attract very general attention, and demand very stringent preventives. Our facilities of inter-communication with Chicago, which is known to be a den of abolitionists and negro thieves, has doubtless emboldened and encouraged the philanthropists to make descents upon our kitchens and carry off our cooks; for it is notorious that a fugitive slave once safely housed in that place cannot be reclaimed except by resort to force, and that hundreds have, therefore, fled to Chicago sure of protection and sympathy.

We have been led to these observations by the recent discovery of an extensive underground railway enterprise, which had its depot at the house of the widow of Berry Meacham [Meachum], formerly the pastor of a negro Baptist Church. There, we understand, measures for the amelioration of the colored population were agitated and practiced, and a system of kidnapping skillfully and successfully carried on, which now for the first time has been brought to light.

In our local column will be found the particulars of this black conspiracy, and of the capture of the fugitives. We call the attention of slaveholders to it, and we would ask them to determine upon some plan that shall rid us of these gangs of depredators who practice crime as a religion, and who belong to a class fortunately known mainly North of Mason and Dixon's line, who disregard and defy both constitutions and laws, and find authority for theft and murder in the fancied requirements of a higher law.