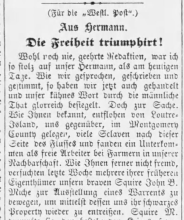 Probably never [illegible], dear editorial staff, I was so proud of our Hermann [illegible]. As we spoke, wrote and voted, so did we now we have also acted and our bold word has been gloriously sealed by the male act. But to the point. Known to you, escaped from Loutre Island, opposite us, in Montgomery County,  many slaves after this side of the [illegible] and found a lodging [illegible] as freelance workers with farmers in our neighborhood, not unfamiliar to you, several of their previous owners tried to convince our good squire John B. Miche to issue a warrant last week, in order to snatch their black property from us M. duly trumped them according to the existing laws of war and his duty as a Republican, and let them go their own way with a fervent and vengeance. Yesterday the gentlemen succeeded [illegible] Negro warrants from a German peace judge, his name is Karl Sandberger, to receive warrants and the deputy sheriff immediately caught four young negroes and put them in the county jail. But now the people rose in fine majesty. The news of this disgrace passed through town and surroundings like wildfire. The brave Germans clustered together, even the [illegible], with a few exceptions, did not fall behind. Curses, threats and curses against the slave owner and her helper, the Sandberger, fulfilled the rust, and the end was assured unanimously that the poor Negroes should be free people by morning, whether by legal means or by storming the jail by bloodshed, no matter. Gasconade County is not supposed to be a slave hunting area and Hermann’s free Germans do not want to be the scold and mockery of the country. [illegible] other equally arrogant but calm-thinking citizens moved excited people to postpone any use of force until at least 9:00 p.m. and asked for their major gene during this. Curtis for employment Capt. C.C.Manwaring as Provost Marshall, since he happened to discover that the previous Marshal [illegible] set up guards at the courthouse (so stood among others the old Strehly brother-in-law of the Blessed Papa [illegible] for hours on end [illegible] in the bitter cold [illegible]… At 9:00 in the evening the men came back with guns and crushing tools and were about to leave for the jail. When the most anticipated dispatch arrived, and the [illegible] immediately found themselves among three thunders in the [illegible] Gen. Curtis issued after the new Provost Marshal Manwaring, which immediately issued an order to release the Negroes. You can imagine the jubilation with which the poor alder was brought out of the singing papa. [Illegible] gave them a good evening meal and some good farmers took them to night quarters. Old Michael Poeschel kept up from the beginning to the end and the best old citizens of the city participated in the fashion that trampled on the law, as local demo friends would like to say. But everything happened according to the military laws recognized by the Congress. So we emancipate -– Hermann is [illegible] ‘Hurray for Union and Freedom!