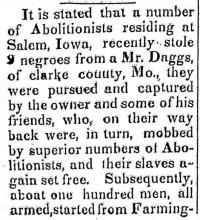 It is stated that a number of abolitionists residing at Salem, Iowa, recently stole nine negroes from a Mr. Daggs, of Clark county, Mo. They were pursued and captured by the owner and some of his friends, who, on their way back were, in turn, mobbed by superior numbers of abolitionists, and their slaves again set free. Subsequently, about one hundred men, all armed, started from Farmington, Missouri, for Salem, Iowa, to recapture the negroes, or arrest the abolitionists.