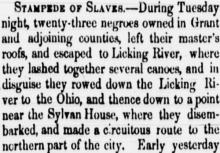 STAMPEDE OF SLAVES.––During Tuesday night, twenty-three negroes owned in Grant and adjoining counties, left their master's roofs, and escaped to Licking River, where they lashed together several canoes, and in disguise they rowed down the Licking River to the Ohio, and thence down to a point near the Sylvan House, where they disembarked, and made a circuitous route to the northern part of the city. Early yesterday morning, they were run off on the route to Canada, by the underground railway.––Cin. Atlas.