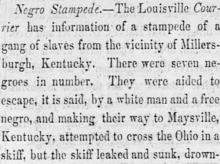 Negro Stampede. –  The Louisville Courier has information of a stampede of a gang of slaves from the vicinity of Millersburgh, Kentucky. There were seven negroes in number. They were aided to escaped, it is said, by a white man and a free negro, and making their way to Maysville, Kentucky, attempted to cross the Ohio in a skiff, but the skiff leaked and suck, drowning four of the slaves, three women, and one child.