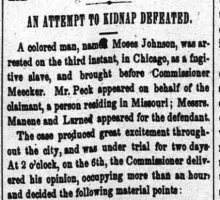 AN ATTEMPT TO KIDNAP DEFEATED.

A colored man, named Moses Johnson , was arrested on the third instant, in Chicago, as a fugitive slave, and brought before Commissioner Meecker. Mr. Peck appeared on behalf of the claimant, a person residing in Missouri; Messrs. Manene and Larned appeared for the defendant. The case produced great excitement throughout the city, and was under trial for two days.

At 2 o’clock, on the 6th, the Commissioner delivered his opinion, occupying more than an hour, and decided the following material points:

When the final decision was announced, says a Chicago paper, the pent-up feelings of the multitude found utterance in shout after shout of exultant applause; the law had been vindicated, and the sacred domain of Liberty was to be infringed upon no longer. Johnson was taken by his friends, passed out of the court-room, and down the steps to his friends below, who hurried off rapidly with him up Lake street to Wells, and down Wells to a place of safety, in case an attempt should be made to arrest him again.