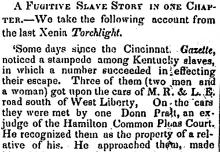 A FUGITIVE SLAVE STORY IN ONE CHAPTER.– We take the following account from the last Xenia Torchlight.

'Some days since the Cincinnati Gazette, noticed a stampede among Kentucky slaves, in which a number succeeded in effecting their escape. Three of them (two men and a woman) got upon the cars of M.R. & L.E. road south of West Liberty, On the cars they were met by one Donn Piatt, an ex-judge of the Hamilton Common Pleas Court. He recognized them as the property of a relative of his. He approached them, made himself known to them, told them that his father, who resides near West Liberty, was in want of laborers, and he assured them that if they would stop with him, that he (Donn) and his friends would purchase them and give them their freedom. The fugitives confided in him–left the cars at Wes. Liberty and took up quarters with old Piatt. After they had been there a few days, the arrangement between Donn and the fugitives leaked out, and the result was that the friends of the fugitives, who understood the character of the Piatts, sued out a writ of habeas corpus requiring old Piatt to bring them before a judge at Bellfontaine, and to show by what authority he held them. Piatt brought them before the court, but being unable to show any authority for detaining them, the negroes were declared to be free to go where they pleased. They were immediately taken in charge by some abolitionists and started on their way for Canada. Within two hours after, the Kentucky claimants arrived in hot pursuit of their 'property.' But they found no body there willing to promote their object. The lawyers declined their fees, and the owners of horses declined to hire to them. After much difficulty they succeeded in getting under way in the chase; but they had not been long in pursuit before they were met by a young Quaker, who under pretence of aiding them, led them so far off in the wrong direction, as to put all hope of recovery out of the question. The fugitives are doubtless by this time safe in Canada; whilst the Kentuckians have returned to their homes to meditate upon the advantages and 'finality' of the modern fugitive slave law.

We have our information in relation to the chase from a gentleman of Bellfontaine.'