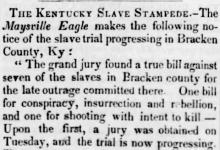 "The grand jury found a true bill against seven of the slaves in Bracken county for the late outrage committed there. One bill for conspiracy, insurrection and rebellion, and one for shooting with intent to kill.––Upon the first, a jury was obtained on Tuesday, and the trial is now progressing. Two negroes occupied nearly five hours in testifying, since which half a dozen white men have testified in relation to the resistance and firing by the company of negroes upon the white men who attempted to take them up as runaway slaves. The jury is composed of good men of Bracken county, selected by the sheriff at a called term, and not by Commissioners as at a general term."