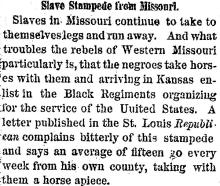 Slaves in Missouri continue to take to themselves legs and run away. And what troubles the rebels of Western Missouri particularly is, that the negroes take horses with them and arriving in Kansas enlist in the Black Regiment organizing for the service of the United States. A letter in the St. Louis Republican complains bitterly of this stampede and says an average of fifteen go every week from his own country, taking with them a horse apiece.

The St. Louis Democrat states that the stampede is by no confined to Western counties. All over the State slaves are making themselves scarce in a manner by no means agreeable to these having investments in them; though according to that paper, about St. Louis the slaves have nearly given up running away. Instead, the simply give regular notices “to quit,” and when the time comes they pack up and go.” We are aware of numerous instances in which slaves, thus emancipate,” says the Democrat, “are living in the immediate neighborhood of their masters, enjoying all the practical fruits of freedom.” So “rolls the ball” in Missouri.