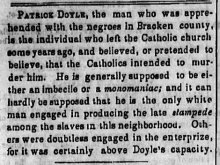 PATRICK DOYLE, the man who was apprehended with the negroes in Bracken county, is the individual who left the Catholic church some years ago, and believed, or pretended to believe, that the Catholics intended to murder him. He is generally supposed to be either an imbecile or a monomaniac; and it can hardly be supposed that he is the only white man engaged in producing the stampede among the slaves in this neighborhood. Others were doubtless engaged in the enterprise, for it was certainly above Doyle's capacity.