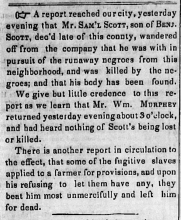 A report reached our city, yesterday evening that Mr. SAM'L SCOTT, son of BENJ. SCOTT, dec'd late of this county, wandered off from the company that he was with in pursuit of the runaway negroes from this neighborhood, and was killed by the negroes; and that his body had been found.

We give but little credence to this report as we learn that Mr. Wm. MURPHEY returned yesterday evening about 3 o'clock and had heard nothing of Scott's being lost or killed.

There is another report in circulation to the effect, that some of the fugitive slaves applied to a farmer for provisions, and upon his refusing to let them have any, they beat him most unmercifully and left him for dead.