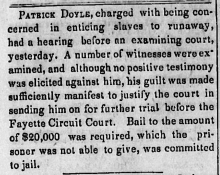 PATRICK DOYLE, charged with being concerned in enticing slaves to runaway, had a hearing before an examining court, on the previous day. A number of witnesses were examined, and although no positive testimony was elicited against him, his guilt was made sufficiently manifest to justify the court in sending him on for further trial before the Fayette Circuit Court. Bail to the amount of $20,000 was required, which the prisoner was not able to give, and was committed to jail.