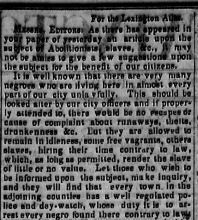 For the Lexington Atlas.

MESSRS. EDITORS: As there has appeared in your paper of yesterday an article upon the subject of Abolitionists, slaves, &c., it may not be amiss to give a few suggestions upon the subject for the benefit of our citizens.

It is well known that there are many negroes who are living here in almost every part of our city unlawfully. This should be looked after by our city officers and if properly attended to, there would be no escapes or cause of complaint about runaways, thefts, drunkenness &c. But they are allowed to remain in idleness, some free vagrants, others slaves, hiring their time contrary to law, which, as long as permitted, render the slaves of little or no value. Let those who wish to be informed upon the subject, make inquiry, and they will find that every town in the adjoining counties has a well regulated police and day-watch, whose duty it is to arrest every negro found there contrary to law; and if a slave, without a pass, commit him to jail as a runaway, at the expense of the owner, and the consequence is, by the activity of their police, these towns are not overrun on holidays, Saturday nights and Sundays, as our city, is, by slaves from the adjoining counties, without the knowledge of their owners, making contracts for the sale of stolen goods and delivering such as they have with them to fill former contracts.

There is no point in the county that is safe from them, in consequence of the numerous disorderly houses who trade with them in our city and the facility afforded by the inefficiency of our police to arrest those who are engaged in these unlawful acts.

There are several hundred free negroes here––a very large majority of whom do not pay one cent of tax, or contribute anything to the prosperity of our city, and it is high time, if we wish our slaves to be of any value, to have all such removed from among us, never to return, as a nuisance to us, and arrest all slaves found acting for themselves contrary to law, and their owners dealt with as the law directs.

If the same energy was used to arrest all such, as is used in the adjoining counties, we would have no such difficulties as are enumerated to complain of––for it is only for want of energy in those who are confided in, that this great evil is forced upon us.

Let those who have a deep interest in the prosperity of our city look well into this matter, for upon them depends the prosperity and good order of it, which is of the greatest importance.