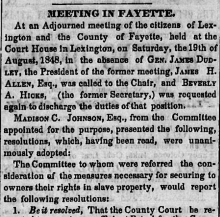 At an Adjourned meeting of the citizens of Lexington and the County of Fayette, held at the Court House in Lexington, on Saturday, the 19th of August, 1848, in the absence of GEN. JAMES DUDLEY, the President of the former meeting, JAMES H. ALLEN, Esq., was called to the Chair, and BEVERLY A. HICKS, (the former Secretary,) was requested again to discharge the duties of that position.

MADISON C. JOHNSON, Esq., from the Committee appointed for the purpose, presented the following, resolutions, which, having been read, were unanimously adopted:

The Committee to whom were referred the consideration of the measures necessary for securing to owners their rights in slave property, would report the following resolutions:

1. Be it resolved, That the County Court be requested to organize an efficient Patrol for the County, sufficient to put into effectual operation the Laws requiring all slaves to remain on the plantation of their owners, except on the written permission of their owners, forbidding all dealings with slaves except by like written permission, and especially the selling them ardent spirits; for suppressing unlawful assemblages of slaves, and for preventing slaves hiring their own time, and that all owners of slaves be requested to unite in giving countenance to, and aiding said Patrol and the other legal authorities, and themselves enforcing a more thorough control and discipline over their slaves.

2. Resolved, That the City authorities be requested by their officers to aid in carrying out in Lexington the objects and purposes of the above resolutions, and to organize a force that will suppress the flocking of slaves to the City without such written permissions form their owners.

3. Resolved, That the Patrol and other legal authorities be requested to put in force the Laws of Vagrancy against all free persons of color who come under its provisions; also the law against their immigration to this State, and that all who may be suspected of illegally dealing with slaves, or otherwise misbehaving, be arrested and require dot enter into bonds for good behavior.

4. Resolved, That the Legislature of Kentucky be petitioned to take into consideration the subject of requiring free persons of color to enter into bonds with good security for their good behaviour, and to prescribe the causes and manner of requiring such bonds, and the penalty for failure to give them.

5. Resolved, That the Legislature be requested to extend to the county of Fayette the provisions of the law of 1841 for the appointment of "Patrols in this Commonwealth." except the 4th and 11th sections thereof.

6. Resolved, That all the officers of the law be requested to put into force the laws against Peddling, and exercise due vigilance against those who, under pretence of peddling, are suspected of going about exciting and persuading slaves to run away from their owners, and that the Legislature be petitioned to require all pedlars before licences is granted to them, to prove before the County Court that he is of good character and obtain a certificate form the Court of such good character.

7. Resolved, That the Legislature be petitioned to authorize the several County Courts to offer suitable rewards for the detection, arrest, and conviction of persons guilty of enticing and persuading slaves to run away, the money for which purpose to be raised by a levy on the black tithables of the county.

Resolved, That our neighboring counties be invited to unite with us in this effort to maintain good order, and preserve the peace and harmony of Society.

On motion of Col. Oliver Anderson, it was resolved, that the thanks of this meeting be tendered to Capt. O.H.P. Beard and all the gentlemen from Lexington and Fayette county, who volunteered their services to aid in capturing the absconding slaves, and the thanks of this county be again tendered to our fellow-citizens of Harrison, Bracken and all other counties, who so generously and promptly rendered their valuable aid in capturing the runaway slaves from this vicinity.

On motion of B.A. Hicks, Esq., it was resolved, that the foregoing resolutions be published at once in handbill form, and circulated throughout the city of Lexington and county of Fayette, and that the newspapers of this and the surroundign counties be requested to publish them.