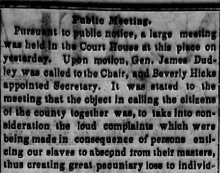 Pursuant to public notice, a large meeting was held in the Court House at this place on yesterday. Upon motion, Gen. James Dudley was called to the Chair, and Beverly Hicks appointed Secretary. It was stated to the meeting that the object in calling the citizens of the county together was, to take into consideration the loud complaints which were being made in consequence of persons enticing our slaves to abscond from their masters, thus creating great pecuniary loss to individuals, and a state of insubordination among slaves, dangerous to the peace and prosperity of society; also, to take into consideration the propriety of enforcing the laws in regard to slaves who were hiring their time, and running at large; also, to enforce the laws in regard to free persons of color, emigrating to our county; and also, the laws, generally, in regard to slaves.

Upon motion, a Committee of sixteen were appointed to draft resolutions for the occasion.

The Committee retired, and upon due deliberation, reported resolutions to the following effect:

1st. That the County Court be requested to offer a reward of $500 for the apprehension and conviction of any person who may be found guilty of enticing slaves to run away from their masters.

3d. Returning the thanks of the meeting to the citizens of Harrison and other counties, for their great efforts in arresting the slaves, who recently absconded from this county.

4th. Appoints a Committee to raise a fund to reward the person who apprehended the person who is supposed to have enticed the slaves to their recent stampede, and also, to pay the expenses of the gallant Fowler, who was dangerously wounded in the affair of Monday last.

The meeting then adjourned, to meet on Saturday next at 10 o'clock, to receive the report of the Committee appointed by the 2d resolution.