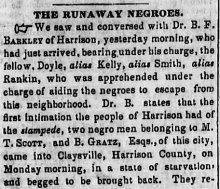 We saw and conversed with Dr. B.F. Barkley, of Harrison, yesterday morning, who had just arrived, bearing under his charge the fellow Doyle, alias Kelley, alias Smith, alias Rankin, who was apprehended under the charge of aiding the negroes to escape from this neighborhood. Dr. B states that the first intimation the people of Harrison had of the stampede, two negro men, belonging to Mr. T. Scott and B. Gratz, Esqs., of this city, came into Claysville, Harrison county, on Monday morning, in a state of starvation, and begged to be brought back. They reported between 40 and 70 negroes to be in the neighborhood, concealed in the woods.

A good many persons being present in the village, for the purpose of attending to the election, steps were immediately taken to arrest them. Dr. Barkley arrested, when alone, a boy belonging to H.T. Duncan, and one to Lawson & Erdman, of this county, both being armed with revolving pistols. On Monday evening, about 7 o'clock, the company raised in Claysville overtook the negroes on the Germantown road, and had an engagement with them, in which Charles W. Fowler, a very respectable young man of Harrison, was mortally wounded, being shot with a pistol ball through the left kidney. The whites being only ten strong, they were compelled to retreat.

In a few minutes the whites were reinforced by ten others, when another engagement ensued, in which Joseph Duncan was wounded in the mouth, losing a tooth, and having a pistol ball shot through his hat. Duncan's horse was shot under him and fell, throwing him in the midst of the negroes; but by the good use of his revolver, he succeeded in fighting his way through them. The whites were now compelled to retreat a second time. The negroes in the meanwhile became scattered through the woods and bushes. These incidents took place on the Germantown road, between Claysville and Waller's Mills. By 10 o'clock on Monday night, Dr. B. and his small party had met the negroes on two occasions, being compelled to retreat both times, with the loss of Duncan and Fowler, the former slightly, the latter mortally wounded.

At 10 o'clock on Monday night the whites were reinforced by three or four hundred recruits. The rest of the night and Tuesday was spent in scouring the woods up and down Licking River and its tributaries. A party also pushed on to the Ohio, to have Foster's Landing, Dover, and other places along the river guarded. On Tuesday the white man was arrested by Henry and Nimrod Wood, and Thomas Ellis, on Drift Run. The whites were with great difficulty restrained from hanging the prisoner on the spot. But, at the earnest solicitation of Gen. Decha, he was spared. He was then carried to Claysville, before three magistrates, tried, and committed. Dr. B. states that the most intense excitement prevailed through the country, several thousand men scouring the country between the Licking and the Ohio rivers.––The mob swore they would massacre Doyle on the ground, but were, through the earnest entreaties of Desha and others, induced to spare him, and let him go to jail.

Dr. B. and some others secretly removed Doyle from the jail at Cynthiana, at 12o'clock on Wednesday night, and arrived in this city early yesterday morning, and lodged him in jail. Doyle was brought here for fear the excited populace would pull down the jail of Cynthiana and hang him. Up to Wednesday night, thirty-three negroes had been arrested and one killed.