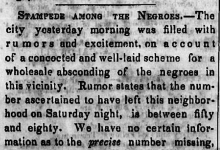 STAMPEDE AMONG THE NEGROES.––The city yesterday morning was filled with rumors and excitement on account of a concocted and well-laid scheme for a wholesale absconding of the negroes in this vicinity. Rumor states that the number ascertained to have left this neighborhood on Saturday night is between fifty and eighty. We have no certain information as to the precise number missing, but we know of at least thirty who are certainly gone. They left by the way of the Russell road, in a northern direction. It is supposed that they have been persuaded off by and are under the care of the abolitionists. One owner states that they were seen going down the Versailles road, firing pistols, whooping and singing songs and ditties. There is no doubt but that white men have had a hand in this matter. Five thousand dollars reward has been offered by the owners of the runaways, for their apprehension.

Since writing the above, we learn that is has been ascertained that sixty-six slaves have been missing. We learn that several have ran away from Woodford and Franklin. We also learn by a telegraphic despatch that a good many escaped from the counties of Bourbon and Mason, on Saturday night. We never heard of such wholesale running off of negroes before. It is all the work of the Abolitionists.