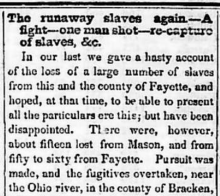 In our last we gave a hasty account of the loss of a large number of slaves from this and the county of Fayette, and hoped, at that time, to be able to present all the particulars ere this; but have been disappointed. There were, however, about fifteen lost from Mason, and from fifty to sixty from Fayette. Pursuit was made, and the fugitive overtaken, near the Ohio river, in the county of Bracken, when a fight ensued between the pursuers, led on by Gen. Lucius Desha, of Harrison, and the blacks headed by a white scoundrel, who had agreed to conduct the slaves to a place of safety in Ohio, for the sum of ten dollars a head. In this fight one of the pursuing party was shot through the body, and his recovery was considered doubtful, but we learned on Saturday that hopes of his recovery are now entertained. He was a returned volunteer named Charles Fowler––was in the battle of Buena Vista. One horse was killed, the property of Joseph Duncan. Form thirty to forty of the slaves, together with their leader, were arrested, and are now in the Bracken and Harrison jails. Two others, we learn, have surrendered themselves, and are now in the jail in this city.

A friend at Kentontown writes us––"I was present when the Court of Enquiry was trying him (the white man,) on yesterday; and it was with great difficulty that the by-standers could be kept from killing him. He was sent on to Lexington to be further examined, and the evidence against him was very strong. He is quite a small man, and passes himself for a Methodist preacher. His name is DOYLE, and was, some time ago, soliciting subscribers, in your county (Mason,) for books. He is intelligent, and the witnesses say he encouraged the blacks to rally and fire, at all times, when our boys would come on them. The blacks all had rifle pistols or six barreled revolvers. I have seen some of their pistols, and they were in prime order.––I have no doubt that all the blacks will be taken, as great exertions are making to do so.

"When they took Doyle (as he calls himself,) last evening to Cynthiana, there to put him in jail to keep him from being killed, the cry was "Kill him!" "Shoot him!!" "burn him!!!" and several hundred surrounded the jail, and threatened to tear it down. The crowd somewhat dispersed before I left, but what was the result I am not able to say. I presume the defat with which they met will prevent the Abolitionists from passing this way soon."

This is about all we have been able to learn of the affair. Many of our citizens turned out in pursuit, but from some cause or other they returned before joining the other pursuers. We think however, that most of the slaves have been apprehended, though we learn that a few made their escape to the Ohio shore.

It is time, in all conscience, that the Abolitionists of the free States had ceased to tamper with the rights and property of Kentuckians; and we hope that the fate of Doyle may teach others to know that Kentucky is a dangerous soil for Abolitionists to tread upon.