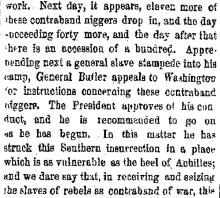 CARRYING THE WAR INTO AFRICA SURE ENOUGH.––A few days ago it was reported that three fugitive slaves had sought the refuge of General Butler's camp at Fortress Monroe, and that, in answer to the requisition of their master the General had declared them contraband of war, and so had retained them and set them to work. Next day, it appears, eleven more of these contraband niggers drop in, and the day succeeding forty more, and the day after that there is an accession of a hundred. Apprehending next a general slave stampede into the camp, General Butler appeals to Washington for instructions concerning these contraband niggers. The President approves of his conduct, and he is recommended to go on as he has begun. In this matter he has struck the Southern insurrection in a place which is as vulnerable as the heel of Achilles; and we dare say that, in receiving and seizing the slaves of rebels as contraband of war, this Southern confederacy will be substantially suppressed with the pacification of Virginia. The Confederate armies may hold out for some time on short allowances of clothing, corn bread and shinplasters; but when it comes to the stampeding of their negroes by hundreds and thousands, they will be glad enough to submit to the sure protection of the Union.