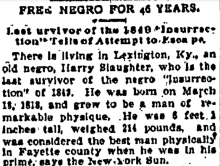 Last survivor of the 1848 'Insurrection' Tells of Attempt to Escape.

There is living in Lexington, Ky., an old negro, Harry Slaughter, who is the last survivor of the negro "insurrection" of 1848. He was born on March 13, 1818, and grew to be a man of remarkable physique. He was 6 feet 1 inches tall, weighed 214 pounds, and was considered the best man physically in Fayette county when he was in his prime, says the New York Sun.

In 1849 he was owned by Miss Sidney Edmiston, who had at that time one of the most costly residences in Lexington. She had a fondness for male servants of gigantic proportions, and on account of his size he was made a dining-room man. Although well treated, he longed for freedom. This is the story he told one day of his attempts to obtain it. He is now in his 80th year:

"I was in my prime, going on 32 years old," he said, "when a man named Doyle came to me and told me that he would pilot me across the Ohio river for $100, and guarantee my safe conduct. All my family were free, the girl to whom I was engaged to be married was free-born, and I wanted to marry my sweetheart as a free man and not as a slave. On a Saturday night in the first week of August 1848, Doyle and forty-five of us negroes left Lexington by way of the Russell Cave pike. We were armed with pistols and bowie knives. I carried an old-fashioned pepper-box pistol and a large bowie-knife. The movement was afterward referred to as an 'insurrection,' but it was misnamed. We did not intend to fight unless attempts were made to capture us, but we pledged ourselves that if we were overtaken by white men and they made an effort to capture us we would fight as long as possible.

"We traveled all night that first night and remained hidden during the day in the bushes. We ate roasting ears, which we gathered from the cornfields through which we passed. Sunday night we continued our travels, and we reached a point, by daybreak on Monday morning, near Ruddell's mill. Here we went into hiding again, but about 11 o'clock that morning two boys saw us. The annual August election was in progress, and the boys went over to the polling place at Ruddell's mill and told the crowd that they had found a big gang of negroes up in the thicket. The men came after us, but we bluffed them off with our pistols, firing many shots. Doyle left us early in the day, and we were without a leader. But we determined to get to the Ohio river, if possible, and we fled through the broken country into Bracken county, and on Tuesday morning we were within five miles of the Ohio river.

"The news of our escape from Lexington had reached the people of that section, and a posse of twenty-five men, including county officials, was in close pursuit of us. The men scattered in all directions and only one remained with me, a negro known as 'Shad.' When we reached the Licking river we plunged in and swam and waded across. The ten or a dozen white men surrounded us. They quickly captured Shad and tied him, but I was determined they should not take me. I cried out in a loud voice:

"I will not be taken! The man that kills me is my friend! I had rather die here and now than go back to slavery!'

"Miss Sidney's nephew, Maury Pindell, had, unknown ot me, offered $500 reward for my safe return to Lexington. The men who had surrounded me were working for this reward, I afterward learned, and that is the reason they did not try to kill me. The men tried to take me, and as fast as they would come within striking distance I would knock the m down. I fought them for five minutes with my fist. I had thrown my bowie-knife away for fear I might kill one of them. When the ten men found they could not capture me they called to the other members of their posse, fifteen in number, how were on the mountain. They came down. They were led by a big man with a coarse voice. He wanted to know why they didn't take me. One of the men told him that they couldn't. The big man got very mad and declared that he had never seen a negro that he couldn't take. He made at me and when he came within striking distance I knocked him down. Several of his followers tried to help him out, but i knocked them down as fast as they came to me. Finally an old gentleman with gray hair, who was called major by the men, began talking to me. He said they didn't want to hurt me and if I would go with him he would take me to Brooksville and would not allow me to be harmed. I respected his age and his gray hairs and told him that I would go with him.

"The next day they reached Brooksville with us and I was kept in jail for seven weeks. I was charged with being one of the ringleaders of the 'insurrection,' but Madison C. Johnson, Maury Pindell and Judge Graves came down to Brooksville and interceded in my behalf. They proved that we were not insurrectionists, but were simply trying to obtain freedom. Well, I was taken back to Lexington and put into Pulliam's [Pullum's] negro jail. I was kept there for a month or more. Miss Sidney had a long talk with me and consented to let me buy myself. I immediately borrowed the money and married my sweetheart, and in just five years and six months from that day I had paid every dollar of the borrowed money, with interest, the total about being $987. All the other boys who were with me during that struggle for liberty are dead. I don't suppose I will last much longer, but I thank God that I have lived for forty-six years a free man."