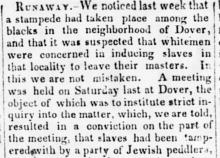 RUNAWAY.––We noticed last week that a stampede had taken place among the blacks in the neighborhood of Dover, and that it was suspected that whitemen were concerned in inducing slaves in that locality to leave their masters. In this we are not mistaken. A meeting was held on Saturday last at Dover, the object of which was to institute strict inquiry into the matter, which, we are told, resulted in a conviction on the part of the meeting, that slaves had been tampered with by a party of Jewish peddlers, who have their headquarters in, or about Dover. It was shown that these men had not only afforded money upon which to make their escape, but had also furnished them with maps, with the roads to be traveled marked out, with such other directions and information as they deemed useful to runaways. Under these circumstances the men were ordered by the meeting to leave the county speedily, which, we understand, they declined to do. Another meeting is appointed for Saturday next, at the same place, at which time, should these renegades be found in the county, they will again be requested to leave. Some of the negroes that we noticed as having absconded last week, have be[en] arrested; others are still at large.

P.S.––Since writing the above, we learn that both the slaves belonging to S.W. Warren, and Joseph Carter, have been arrested. They were found on the other side of the Missouri, a short distance below. One of the men resisted, and was shot before taken, but it is not thought to endanger his life.––Lexington Express.