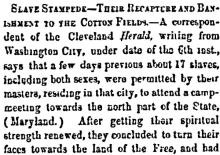 SLAVE STAMPEDE--THEIR RECAPTURE AND BANISHMENT TO THE COTTON FIELDS.--A correspondent of the Cleveland Herald, writing from the Washington City, under date of the 6th inst., says that a few days previous about 17 slaves, including both sexes, were permitted by their masters, residing in that city, to attend a camp-meeting towards the north part of the State, (Maryland.) After getting their spiritual strength renewed, they concluded to turn their faces towards the land of the Free, and had almost succeeded in reaching a place of safety, when the stampede became known. A drover in Baltimore offered to capture the Fugitives for a share of the sale money to the cotton plantation of the South. The owners having agreed to his proposition, he went in pursuit and brought back nine of the party, who were yesterday put en route for the cotton fields. The profits to the catcher, I am told, amounted to more than ($2,000) two thousand dollars. The balance of the party have not yet been captured!