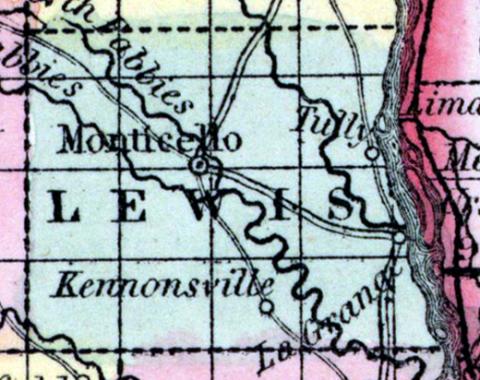 CANTON, a post-village of Lewis county, Missouri, on the Mississippi river, 191 miles above St. Louis, is one of the principal shipping points of the county. It contains 1 church, several schools, 1 printing office, 1 steam-mill. Population, 400.  (Baldwin & Thomas, A New and Complete Gazetteer of the United States ... 1854)

CANTON, A post town of Lewis County, Canton township, situated on the Mississippi river, 11 miles from  Monticello, the county seat, 175 miles from St. Louis, and 125 miles from Jefferson City, was first settled by Americans, viz., Messrs. Bogarth, Pritchard, Sinclair, Hawkins and Myers in 1827. The post office has been established nine years.  The following stage lines run as follows from Canton to Lancaster, 75 miles, tri-weekly;  to Trenton, 200 miles, weekly; to Keokuk and Palmyra, each 25 miles, tri-weekly during winter.  A railroad is projected to Memphis and one to Weston, which, when completed will pass through Canton. The town contains five churches, viz., Methodist, Presbyterian, Lutheran, German, Methodist, and Christian, a Christian University with an endowment of $150,000.  A Methodist Seminary, the Desota Female Institute, and a public library.  The Masons have two lodges, viz., Canton, No. 100, and Tully, No. 39.  The Odd Fellows have one lodge, called Franklin, No.44.  A branch of the Bank of Missouri is located here, Z.T. Knight, President, and A. Reese, Cashier.  The town also supports a weekly paper, called the North East Reporter, published by A.D. Rector, and issued every Friday.  The chief productions are wheat, corn, oats, hemp and tobacco.  Its timber, oak, walnut, elm and hickory.  Limestone and granite rock are found here in abundance.  There are also several small streams which afford excellent water privileges and mill sites.  Improved land is worth on average, $15 per acre, and unimproved $10.  The population, which is rapidly increasing, amounts at the present time to 2500.  (The Missouri State Gazetteer and Business Directory, 1860)