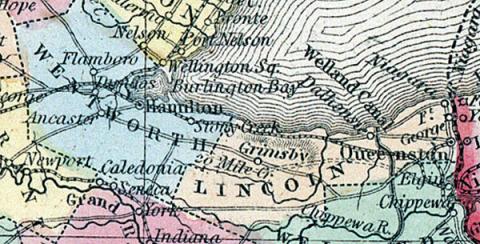 HAMILTON. The District Town of the Gore District, in the township of Barton and county of Wentworth; is situated in an extensive valley on the south side of Burlington Bay, at its western extremity. The town was laid out in the year 1813, by a Mr. Hamilton, from whom it derived its name. On account of the swamp in the vicinity of the bay, the principal part of the town has been placed about a mile back from the bay, on a gently rising ground. Immediately behind the town rises the mountain (to the height of at least 150 feet), or more correctly speaking, the high table land, which stretches away to the Niagara River. Previous to the completion of the Burlington Canal, vessels could not approach nearer than Burlington Beach, about ten miles from the town, where a customhouse and warehouses were established. Since the opening of the canal, the trade of the town has increased rapidly, and it is now the principal market for the western merchants. An immense amount of goods is annually imported. Excellent freestone and limestone are procured from the mountain, which are of great advantage to the town, as the merchants are beginning to build almost exclusively of stone; and the town promises in a few years to become one of the handsomest on the continent of America. Many buildings are already erected with cut stone fronts: among the handsomest of these, are the Gore Bank and the Bank of British North America. The streets are well laid out. Some years since, a person offered to supply the town with water, conveyed from a spring on the mountain above the town ; the height of which would have allowed of the water being carried to the very top of every house; provided the monopoly was secured to him for a certain number of years. His offer, however, was declined; had it been acceded to, it would have been of immense benefit to the town. The first district court was held in Hamilton in the year 1822. The town was incorporated in 1833, and in the same year sent a representative to the House of Assembly. The population of Hamilton, according to a census taken in the summer of 1845, is 6475. Excellent roads now stretch away in every direction, and stages leave Hamilton every day for London, Port Stanley, Chatham, Detroit, Port Dover, Galt and Guelph, Niagara and St. Catharines, and Toronto, and three times a-week for Goderich. The British steamboats “Eclipse” and “Queen,” leave daily, during the season, for Toronto; and the American steamboat “Express,” for Queenston and Niagara. Eleven schooners, whose collective tonnage amounts to 970 tons, and one barque of 330 tons, are owned here. The public buildings and institutions consist of a stone jail and court-house, two market-houses (one of which is of brick, over which is the town hall, containing a room ninety by fifty feet, and fifteen feet high), custom house, post office, police office, engine house (with two engines), and theatre. There are eleven churches and chapels, viz., Episcopal, Presbyterian, Catholic, Free Church, Secession, Congregational, Wesleyan Methodist, Ryerson Methodist, Canadian Wesleyan, and two for coloured people, Baptist and Methodist. There are two societies established for charitable purposes, “St. George's" and “St. Andrew’s.” There are two news and reading rooms in the town—the “Commercial News Room,” established and supported by means of a subscription amongst some of the merchants of the place; and “Bull's News Room.” attached to the Gazette Office, where the following newspapers and periodicals may be seen:  Montreal Times, Courier, Transcript, Canada Gazette, Gazette, and Herald; Toronto British Canadian, Herald, British Colonist, Globe and Banner; Kingston Chronicle, British Whig, News; London (C.W.) Times; Woodstock Herald ; Guelph Herald; Peterboro’ Chronicle; Brockville Recorder; Dumfries Courier; Brockville Statesman, Niagara Chronicle, and Argus; Ottawa Advocate; The Church; Cobourg Star; Woodstock Monarch; Chatham Journal; St. Catharine's Journal; Brantford Courier; St. Thomas Standard; Belleville Intelligencer; Life at the Springs; Deutsch Canadian; Hamilton Gazette. British Papers.-European Times and News Letter, Dublin Warder, Downpatrick Recorder, Leinster Express, Dublin Monitor, Edinburgh Weekly Journal, Army List, Navy do., Blackwood's, Dublin University Magazine. New York.-Anglo American, Evening Express, Albion, Sun, Spirit of the Times, Commercial Advertiser, Utica Gospel Messenger. The Journals of the House of Assembly are also kept here. There is also a Mechanics' Institute. Three newspapers are published here, “Hamilton Gazette,” “Journal and Express,” and “Herald.” Sir Allan McNab has a handsome mansion, called “Dundurn,” a short distance out of the town.Amount of ratable property in the town of Hamilton £109,998.
List of Government and District Offices kept in Hamilton.—Sheriff, Clerk of Peace, Treasurer. Judge of District Court, Inspector of Licenses, Collector of Customs, Warden, Judge of Surrogate Court, Registrar of do., Crown Lands Agent, Emigrant Agent, Superintendent of Schools, District Clerk, Clerk of District Court, Coroner, Registrar of county of Wentworth.
Professions and Trades.—Nine physicians and surgeons, sixteen lawyers, three breweries, ten wholesale importers of dry goods and groceries, five importers of hardware, forty-nine stores, two foundries, four printing offices, three booksellers, three chemists, sixty-five taverns, two tanneries, three coachmakers, two soap and candle factories, four auctioneers, five saddlers, eleven cabinet makers, three watchmakers, six bakers, ten shoemakers, three gunsmiths, three confectioners, fourteen groceries, eleven beer shops, six builders, five stone masons, five tinsmiths, four hatters, fourteen tailors, eight painters, one marble and stone works, thirteen blacksmiths, three ladies’ seminaries, two schools for boys. Four banks—“Gore,” “Commercial,” “Montreal,” and “Bank of British North America.”
Principal Taverns and Stage Houses.—“Week's (late Press's) Royal Exchange,” and the “Commercial.” The former contains above sixty rooms. Land Agents.-J. T. Gilkison, King Street; Alex. Glen, King Street; and Wedd, Street. Commission Merchants and Shipping Agents.--M. W. & E. Browne, Land & Routh. (Smith's Canadian Gazetteer)