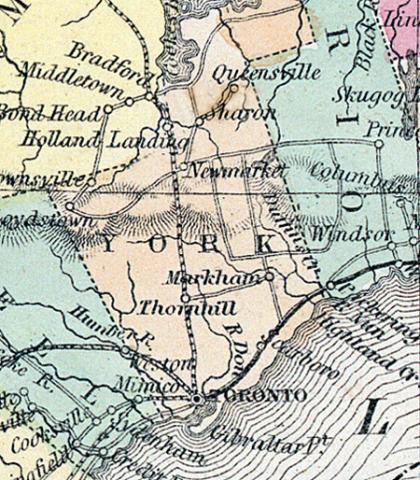 HOME DISTRICT. Consists of the County of York and the City of Toronto. The county of York is divided into four ridings, each returning one member to the Legislative Assembly. The north riding comprises the townships of Brock, North Gwillimbury, East Gwillimbury, Georgina, Mara, Reach, Rama, Scott, Thorah, Uxbridge and Whitchurch. The south riding comprises the townships of Etobicoke, King, Vaughan, and York, and for the purposes of registration of titles only, the city of Toronto. The east riding comprises the townships of Markham, Pickering, Scarborough, and Whitby; and the west riding comprises the townships of Albion, Caledon, Chinguacousy, Toronto Gore, and Toronto township. The Home District is situated nearly in the centre of the Province, and is bounded on the east by the Newcastle and Colborne Districts; on the north by the Simcoe District, Lake Simcoe, and Lake Gougichin; on the west by the Simcoe, Wellington, and Gore Districts; and on the south by Lake Ontario. The Home District has been settled about fifty years, and in 1799 it contained only 224 inhabitants. This district comprises a great variety of soil, and also a considerable difference in point of climate; the townships bordering on Lake Simcoe being about 530 feet above Lake Ontario. The land for from two to three miles back from the margin of Lake Ontario, is generally rather poor and sandy, with the exception of the cedar swamps, the soil of which is very rich. As you recede from the lake, the land improves in quality; and at from four to five miles from the lake you frequently come upon splendid wheat land. A succession of pine ridges traverses the district; running through the north of Whitby, and south of Reach, the centre of Uxbridge and Whitchurch, the centre of King and Albion, and the north of Caledon ; and from thence into the Simcoe and Wellington Districts. The district is watered by the Credit, Humber, Don, Rouge, and the Holland Rivers, and the Etobicoke and Duffin's Creek; besides numerous other small streams, many of which are excellent mill streams, and are well studded with both grist and saw mills. The Nottawasaga River also takes its rise in this district. The northern townships in the district, although enjoying a fine climate, and containing excellent land, have hitherto been kept very much in the back-ground for want of good roads; some parts being altogether impassable for vehicles, except during the time when the (so called) roads were covered with snow, and others almost so during a large portion of the year. Even the principal road in the district, the great northern thoroughfare, with the exception of the sixteen miles (to Richmond Hill) which is macadamised, has generally been for some time during every spring, in such a state that no farmer having any regard for his horses would allow them to travel on it. It is now, however, under contract, and there is a prospect that in the course of two or three years, when the newly made road shall have settled down, the farmers in the townships about Lake Simcoe may be able to bring their produce to Toronto market. Good roads into the interior of the northern back townships are still however very much wanted. Next to the Gore District, the Home is the best settled district in the Province, The road for eighteen miles along the Kingston road from Toronto is planked; and the Yonge Street road is macadamised to Richmond Hill (sixteen miles), and the Dundas Street to Cooksville (sixteen miles). The former is now to be macadamised as far as the Holland Landing, and the latter for some distance farther westward. The principal town in the district is Toronto, the district town, and formerly the capital of the Upper Province; and there are besides in the district the villages of Oshawa and Windsor in Whitby; Markham, Richmond Hill, and Thornhill, in Markham; Newmarket, in Whitchurch; Holland Landing, partly in East and partly in West Gwillimbury; Lloydtown, in King; Mimico and Weston, in Etobicoke; Cooksville, Springfield, Port Credit, Streetsville, and Churchville, in Toronto; besides numerous others of less note. In the Home District 24,410 acres of Crown lands are open for sale, at Ss. currency per acre; to purchase any of which, application must be made to the Crown Lands Agent, at Toronto. These lands are situated principally in the townships of Mara, Georgina, East and North Gwiliimbury, Brock, Thorah, and Rama. Nearly 30,000 acres of land have been brought into cultivation between January, 1842, and January, 1844. Population of the district in 1842, 58,853; since when it has probably increased one-fifth. (Smith's Canadian Gazetteer, 1849)