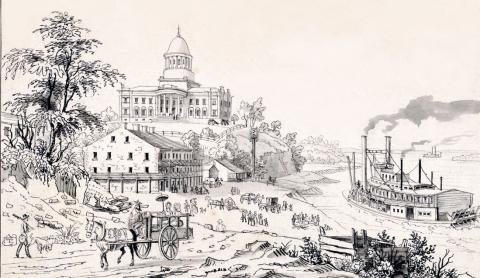 MISSOURI, (i.e. the "Mud river,") the longest tributary stream in the world, has its source in the Rocky Mountains, lat. 45° N., Ion. 110° 30' W. The springs which give rise to this river are not more than a mile from the head waters of the Columbia, which flows W. to the Pacific ocean. The first 500 miles of its course to the Great Falls is nearly N. ; then inflecting E. N. E., it reaches its extreme northern bend at the junction of White Earth river, lat. 48° 20' N. After this its general course is S. E., till it joins the Mississippi in about 38° 50' N. lat., and 90° 10' W. Ion. At a distance of 411 miles from the source of the Missouri, are what are denominated the Gates of the Rocky Mountains. The scenery at this place is remarkable wild and impressive. For a distance of nearly six miles, the rocks rise perpendicularly from the water's edge to a height of 1200 feet. The river is compressed to a width of 150 yards, and for the first three miles there is only one spot, and that of but a few yards in extent, on which a man could stand between the water and the perpendicular walls. At a distance of 110 miles below this, and 2575 miles above the mouth of the Missouri, are the Great Falls, where the river descends, by a succession of falls and rapids, 357 feet in 16 miles. The perpendicular falls commencing down the stream are, first one of 87 feet, one of 19 feet, one of 47 feet, and one of 26 feet. Between and below these are continual rapids, from 3 to 18 feet descent. These falls, next to Niagara, are the grandest in North America. The bed of the Missouri commences at the confluence of three small streams, about 720 equal in length, and running nearly parallel to each other — Jefferson's, Madison's, and Gallatin's. The Yellowstone, 800 yards wide at its mouth, and probably the largest tributary of the Missouri, enters it from the S. W., 1216 miles from its navigable source. These two rivers, at their junction, are about equal in size. Steamboats ascend to this point, and might ascend farther both by the main stream and its affluent. Chienne river, 400 yards wide at its mouth, enters the Missouri from the S. W., 1310 miles from its mouth; White river, 300 yards wide, enters it from the S. W., 1130 miles from its mouth; Big Sioux river, 110 yards wide, enters it from the N. E., 853 miles from its mouth ; Platte river, 600 yards wide, enters it from the S. W., 600 miles from its mouth ; Kanzas river, 233 yards wide, enters it from the S. W., 340 miles from its mouth; Grand river, 190 yards wide, joins it from the N., 240 miles from its mouth, and Osage river, 897 yards wide, flows into it from the S. W., 133 miles from its junction with the main stream. The Missouri is stated to be 3096 miles long to its confluence with the Mississippi : add to this 1253 miles, the distance its waters must flow to reach the Gulf of Mexico, and we have an entire length of 4349 miles. There is, however, reason to believe that the early statements respecting the extent of this river and its tributaries were somewhat exaggerated. Throughout the greater part of its course, the Missouri is a rapid, turbid stream. No serious obstacle, however, is presented to navigation from its mouth to the Great Falls, a distance of 2575 miles, excepting perhaps its shallowness during the season of the greatest drought, when steamboats sometimes meet with difficulty in ascending. The flood from this river does not reach the Mississippi till the rise in the Red, the Arkansas, and the Ohio rivers has nearly subsided. Vast prairies, with narrow strips of alluvion skirting the streams, compose the Missouri basin, excepting the upper portion of the river, which flows through an arid and sterile region. The entire extent of area drained is estimated at 500,000 square miles.  (Baldwin & Thomas, A New and Complete Gazetteer of the United States ... 1854)