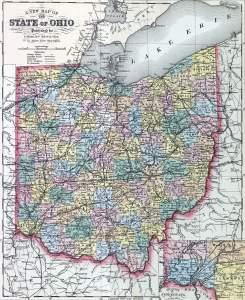 From Hayward's 1854 Gazetteer:  "This state has heretofore been classed among the North-west States of the American Union; but the vast accumulation of territory lying still farther west and north has left Ohio more properly among the Middle States, on the Atlantic side of the continent: indeed, her relative position, considered in regard to the present north-western possessions of the United States, is actually that of one of the Eastern States of this republic.  Marietta, the oldest town in the state, was settled, in 1788, by the " New England Ohio Company." The next permanent settlement was at Columbia, in the following year. In 1791, a company of French emigrants founded the town of Gallipolis. Large bodies of New England people, in 1796, settled several towns on Lake Erie. Before the above settlements were undertaken, several of the neighboring states, which, by charter or otherwise, were proprietors of various tracts of unappropriated western lands lying within this territory, had, from time to time, relinquished their claims; and numerous Indian titles were also extinguished by treaty. A territorial government was formed in 1799, in which year the legislature convened for the first time, at Cincinnati, and elected General William H. Harrison as delegate to Congress. A state constitution was formed in 1802, by virtue of which, and under authority of Congress, Ohio became an independent member of the federal Union."