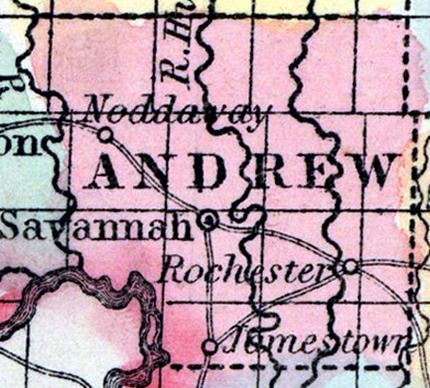 ANDREW COUNTY.  This county was first settled in 1837, by Joseph Walker, Esq., and in 1850 contained 9434 inhabitants, and it now, 1860, contains a population of 12,082. Is bounded on the west by the Missouri and Nodaway Rivers, on the south by Buchanan, and separated from the Iowa line by Nodaway County. The land is fertile and rolling; more timber than prairie. The average product of farms, is of hemp, 500 to 600 pounds per acre; corn, 100 bushels; wheat, 40; oats, 30; buckwheat, 50; potatoes, onions, and beets, immense crops; 600 to 800 gallons of wine to the acre; also good yields of all kinds of grasses and most varieties of fruit; unimproved land is held at from $1 25 to $5, and improved from $12 to $50. Water power has been improved and is in use on the One-Hundred-and-Two, the Platte, and Nodaway.
There are in the county 6 churches, 3 private schools, 1 newspaper, 6 hotels; 1 bank, (Branch of Southern Bank of Missouri,located at Savannah;) lawyers, 7; physicians, 7; merchants, 16; grocers, 4; druggists, 3; silversmiths, 2; tinner, 1; blacksmiths, 4; wagon-makers, 4; saddler, 1; tailors, 4; shoemakers, 4; cabinetmakers, 3; carpenters, 6; saw-mill, 1; steam flouring-mill, 1; mason, 1. Emigrants will here find good farming land, well supplied with timber and water, and a good market .
SAVANNAH, the county-seat and principal town, twelve miles from St. Joseph, and five miles from the Missouri River, on the projected line of the Platte County Railroad. The situation is elevated, and the view afforded of the surrounding country is extensive. The first house was built here in 1842, and there is now a town of 1000 population, with four churches, a Masonic Lodge and Chapter, Odd Fellow's Lodge and Encampment, a bank, and full supply of business houses of all classes. Surrounded by intelligent farmers and peopled by industrious citizens, the prospects of the town and county are very fair. An excellent court-house has recently been erected, which speaks well for the enterprise and liberality of the citizens. Population of Fillmore, 400; Rochester, 300; Amazonia and Boston united, 250; Whitesville, 150.   (Parker's Missouri as it is in 1867..., 1867)