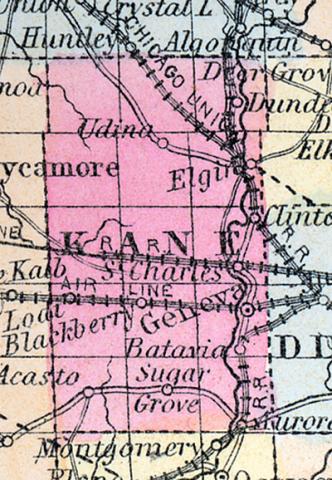 AURORA  Is a city in the township of Aurora on the Fox river, in the south-east part of Kane county, 43 miles from Chicago, 122 miles north-east from Springfield and 10 miles from the county seat. It was settled in 1834, and is rapidly increasing in population. The city is drained by Fox river, which affords abundance of water power for the various manufacturing establishments, among which are the celebrated "Black Hawk Mills." It has a rich soil, adapted to grass and grain. In the immediate vicinity is found an abundance of building material, in the shape of limestone and clay and sand for brick. The Chicago, Burlington & Quincy railroad passes through the city, thus affording facilities for travel and transportation, and making it the center of trade for the surrounding country. The railroad company has erected some fine buildings, used as freight houses and machine shops. There are in the city three hotels, nine churches, eleven schools and a seminary, which has an excellent reputation. The building used by the latter is a magnificent structure, erected at a cost of $65,000. Two weekly newspapers. The city government consists of a mayor, city clerk and eight aldermen.   R. C. Mix, Postmaster.  (Hawes' Illinois State Gazetteer..., 1859)