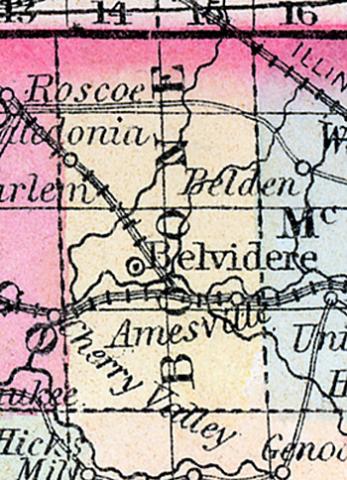 BELVIDERE   County seat of Boone county, situated 76 miles north-west of Chicago, on the Galena and Chicago Union railroad, the junction of the Beloit branch of which is at this place. The town lies on both sides of the river Kishwaukee, a small stream which affords some water power. It has been settled about twenty-two years, and contains a population of about 2,500 in the incorporated limits. It contains about 40 stores of all kinds; 4 banks; a printing office, from which the Standard (rep.) is issued weekly, which is now in its sixth volume; 3 flour mills, 1 steam planing mill and sash factory, a brewery, 9 churches, a female seminary, two union schools and several select schools, 5 hotels. The various trades and professions are all well represented. The country back of this town is very fine, and well settled by people mostly from New York and New England. John Saxton, Postmaster.  (Hawes' Illinois State Gazetteer...,1859)