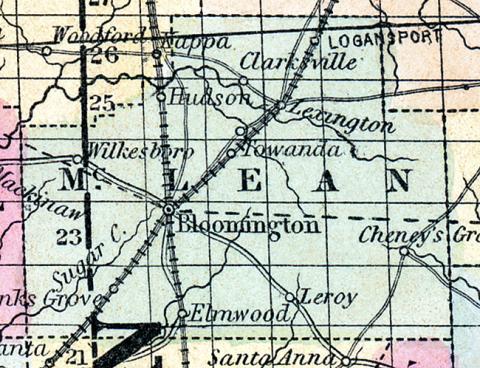 BLOOMINGTON   Is a beautiful and flourishing city, capital of McLean county, at the intersection of the Illinois Central and St. Louis, Alton and Chicago railroads, 61 miles from Springfield, 157 from St. Louis and 128 from Chicago. It was settled in 1830, by James Allen, who purchased the land of government, at $1.25 per acre. In the year following he succeeded in getting a bill passed by the state legislature for the formation of McLean county, the boundaries of which were so fixed as to make his " farm", as he styled it, the most eligible site for the county seat, for which Mr. Allen donated 80 acres of ground. So rapid was the settlement, that the same year lots sold there from $5 to $50 each. Previous to its purchase from the government this land was in possession of the Delaware and Kickapoo Indians, evidences of whose existence are occasionally met with even at the present day. For a series of years Mr. Allen's log cabin was used as a court room, where the several courts of the county held their sessions.
In 1847 a city charter was granted, and in 1854 an act was passed providing for an extension of the city limits, and from this date a constant rapid advancement has been evident, both in the number and wealth of her inhabitants. Few of the interior cities of the state, or of the west, present more plainly than this the energy which has made this western country so desirable in a commercial and agricultural point of view. Besides the county buildings, there are many other fine buildings, both of a public and private character. There are 11 churches, a state normal institution, Bloomington college for females, Wesleyan university, the Bloomington high school. All these institutions possess fine buildings, and are admirably adapted to their various uses. Bloomington also has five district schools and a number of private ones. Bloomington college, for females, was founded by the united efforts of the citizens, under the guidance of W. T. Major. The cost of the building alone was $25,000, and was defrayed solely by its principal founder. The building affords ample accommodations for 75 boarders and 200 pupils. The Wesleyan seminary is designed for males, and is a thorough institution, possessing all the advantages of older similar ones at the cast. It will accommodate about 200 students. There are also three chartered banks, viz.: Bloomington Bank, Lafayette Bank and McLean Bank; three newspaper offices: Pantograph, National Flag and Times, the two first have daily and weekly issues. A circulating library, called the Ladies' Library Association, is also a marked feature among other matters of interest.  Four good hotels are now in operation: the Landon House, Waverly House, Denman House, and American House. The first was formerly known as the Pike House, but has recently been refitted and furnished, and is fast gaining popularity. Like all other western cities, Bloomington has made rapid strides of advancement, and it is predicted that in the next ten years her population will more than double. Present population, 7,600, George D. McElheney, Postmaster.  Mayor, A.J. Meriman. City Marshal, A. T. Briscoe.  (Hawes' Illinois State Gazetteer...,1859)