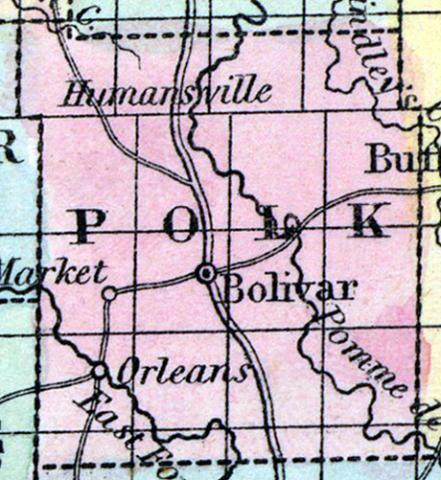 BOLIVAR   A post village and the county seat of Polk county, situated on a tributary of Sac river, of the Osage, 90 miles south-west of Jefferson City.   (Missouri State Gazetteer..., 1860)

BOLIVAR, the county-seat, and principal town in the county [Polk], has a population of 700. It is pleasantly situated near the center of the county, and is surrounded by a heavy body of timber, and is 30 miles north of Springfield, and 50 miles southwest of Warsaw, on the great emigrant road leading from the Missouri River to Texas. A telegraph line and daily coaches of the best class connect Bolivar with the east, north, and south. The public buildings are a large, well built court-house in the public square, and two brick churches belonging to the Methodist and Baptist denominations. Of business houses in Bolivar, there are 7 dry goods stores, 1 clothing store, 1 drug store, 2 saddler shops, 2 blacksmith shops, 2 carding machines, 2 newspapers, 4 doctors, 4 lawyers, and 2 hotels.  (Parker's Missouri as it is in 1867..., 1867)