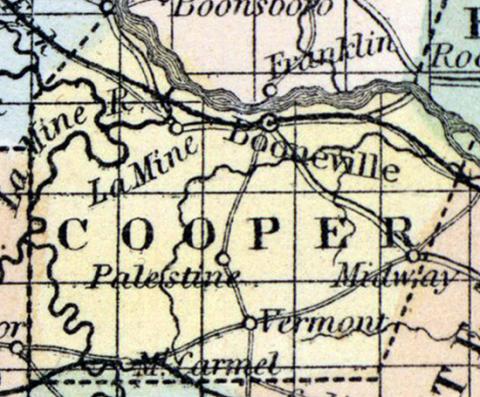 BOONVILLE    The county seat of Cooper county, Boonville township, is beautifully situated on the Missouri River, 225 miles from St. Louis, and 50 from Jefferson City. The post office called Boonville has been established thirty-five years, and the town was settled about the same time by A. Morgan. There are several stage routes emanating from this city. One to St. Joseph, 200 miles; to Syracuse 25 miles; Tipton 25 miles, and the North Missouri Railroad 45 miles. The town contains four churches. viz: Methodist, Baptist, Episcopal and Presbyterian, and one Female College.
The Masons have a Lodge, viz: Cooper Lodge, No. 36, a Chapter, No. 5, and Council No. 19.  The I.O.O.F.'s have three Lodges, viz: Far West Lodge, No. 4, Olive Branch, No. 36, and Golden Link, No. 94; there is also a Boonville Encampment. There are two papers published in Boonville, viz: The Patriot, by T. M. Caldwell, issued every Saturday, and the Observer, issued on the same day and published by A. W. Simpson. A bank is also located here, viz: St. Louis Bank, having a capital of $200,000. The chief productions are corn, wheat and oats. Its timber, black and white walnut, oak, ash, and hickory. mineral. Improved land may be bought from $15 to $150 per acre, and unimproved at $10 per acre. Population about 4000.  Mayor, H.E.W. McDennon. Marshall, John P. Marret.  County Sheriff, Harvey Bunce.  (Missouri State Gazetteer..., 1860)